The barber, in past, was a Jack-of-all-trades.

He attended to the shavings and to the laying-out of deceased: he carried out blood-letting (using leeches), applied compresses and gave injections. He prescribed remedies for sore throat, stomachache, earache. And he pulled out teeth.\nHe didn’t earn enought as barber so he made ends meet by substituting social figures that were either non-existent or too costly. Likewise, the blacksmith was also a vet and the saddler was often a tailor.

The barber was a good entertainer, cheerful, unprejudiced and easy-going: a true databese of informations about the town (gossips, scandals, affairs) that, during the telling became more and more magnified and distorted.

Between jobs he played the guitar or, more often, the mandolin.

He was lover of dancing and dining, gallant and conceited, friend to everyone and no-one. If, by chance, he was also attractive, the number of women he had exceeded by a long way the number of men he had shaved in his fiendly ‘saloon’. 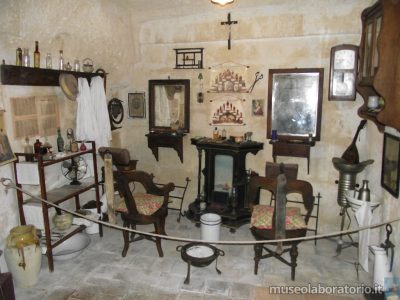 Oil lamps
Back to Shoe shiner’s chairGo to Brigandage showcase