In Via Chiancalata there were various blacksmith’s shops (f’rrer ), which were forges with walls blackened by the smoke in which it towered a gigantic bellow of wood, iron and leather. It was operated by the apprentice through a chain and it had an autonomy of some minutes thanks to a long iron tube that dosed the air and directed it to the burning carbons while blacksmith made the iron red hot and forged it on the anvil using hammers and pliers of different dimensions.

Many elderly people that during the infancy were blacksmiths labourers remember with bitter smiles the hammers and pliers thrown to them from the blacksmith when they didn’t activate the bellow in time in the tricky moment of the forge.

The blacksmith, in fact, shod horses to protect their hoof. To do this used the incastro (an utensil that served for equalize the hoof), hammers, pliers, nails and torcinasi for the uneasy bests.

During the threshing time, the blacksmiths shod even during the night to help the farmers in safeguarding the mules’ health.

The farmers also went to blacksmiths when their beasts had problems. In fact they took care of the wounds, assisted during animals’ birth, sterilized pigs such as veterinarians.

In Matera they were very in demand during the parade preparation for the feast ‘Festa della Bruna’  the 2nd of July: they applied special horseshoes in order to avoid the slipping on the town road slabs. 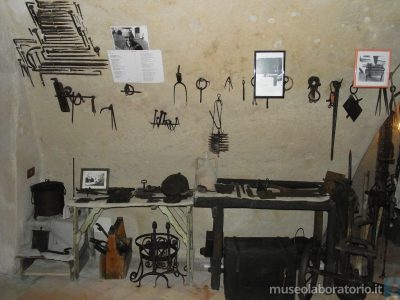 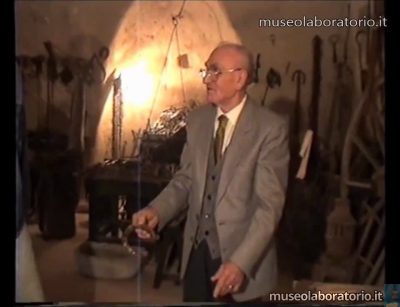 Oil lamps
Back to Mastro d’asciaGo to Tailor