The farms were characteristic structures of the South Italy where agricultural and zootechnical activities were carried out.

The farms had an autonomous organization and their management was provided by several people among which was in force a rigid hierarchy.

At the top there was the massaro of the sheep and the one of the fields. Then there were the capo morra (a morra consisted in a flock of 200-250 sheeps), the casiere employed in the wrapping of the cheeses, and the shepherd who had to guard a morra of sheeps.

The last step of this hierarchical staircase were the boys which were often object of maltreatments and violences from the adult shepherds.

The shepherds conducted a life not-unlike that of the animals that they brought to the pasture; forced to live in the sheepfolds, they could reach the family only every fifteen days for food and clean garments supply.

They received a small salary, food and some times the privilege to conduct to the pasture their own sheep together with those of their master.

Two events characterized during the year the shepherds’ life: the transumanza (seasonal migration of the flocks from plain pastures to mountain ones and vice-versa) and the shearing.

The life of the shepherds in the pastures had endless times of silence and loneliness almost always filled by wood-carving. 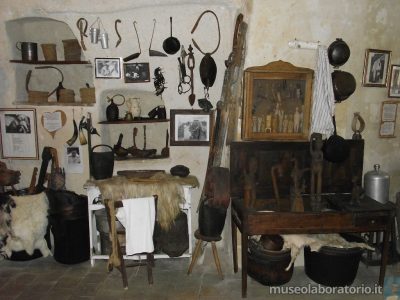